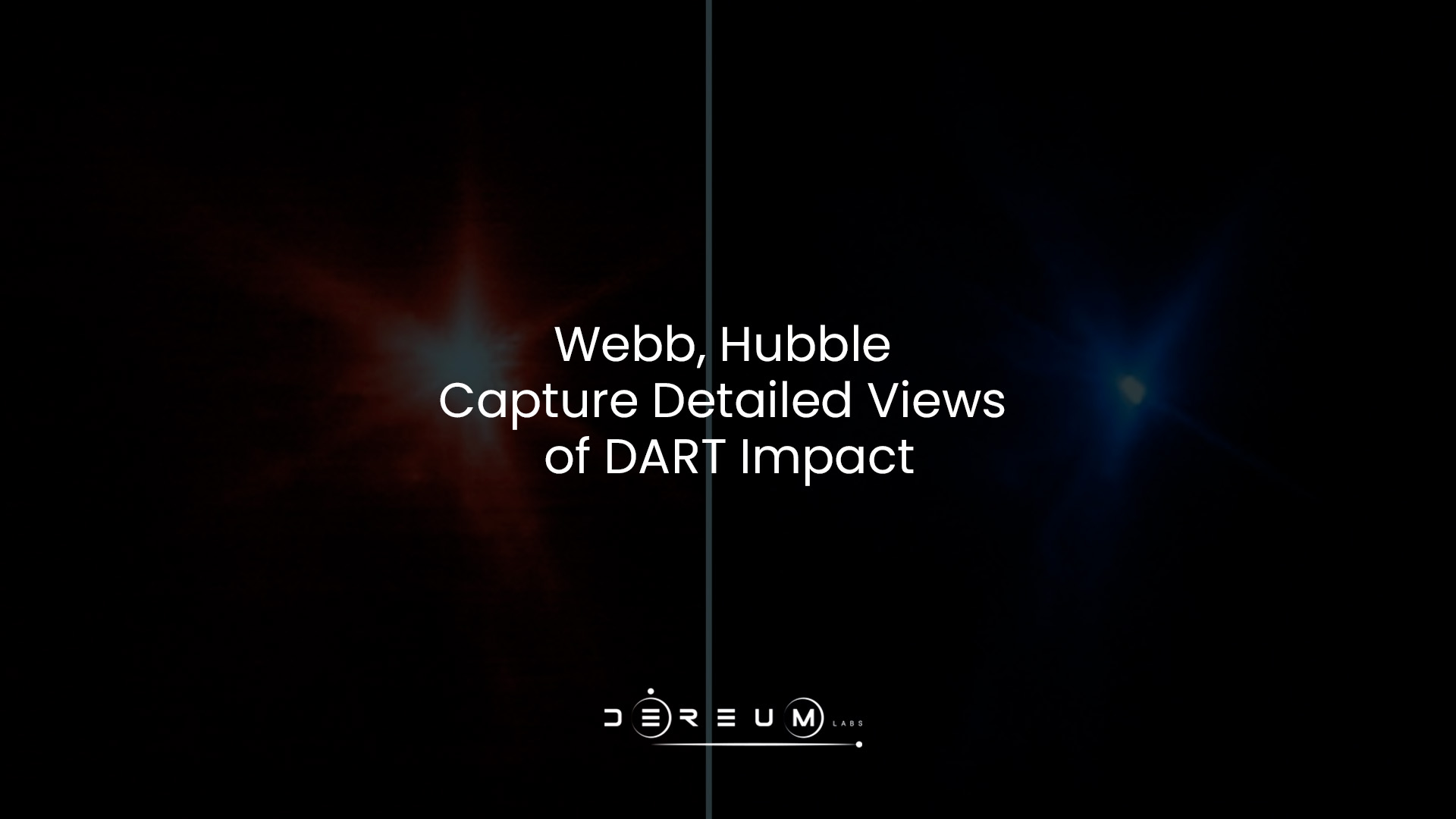 Two of NASA’s Great Observatories, the James Webb Space Telescope and the Hubble Space Telescope, have captured views of a unique NASA experiment designed to intentionally smash a spacecraft into a small asteroid in the world’s first-ever in-space test for planetary defense. These observations of NASA’s Double Asteroid Redirection Test (DART) impact mark the first time that Webb and Hubble simultaneously observed the same celestial target.

On Sept. 26, 2022, at 7:14 pm EDT, DART intentionally crashed into Dimorphos, the asteroid moonlet in the double-asteroid system of Didymos. It was the world’s first test of the kinetic impact mitigation technique, using a spacecraft to deflect an asteroid that poses no threat to Earth, and modifying the object’s orbit. DART is a test for defending Earth against potential asteroid or comet hazards.

The coordinated Hubble and Webb observations are more than just an operational milestone for each telescope – there are also key science questions relating to the makeup and history of our solar system that researchers can explore when combining the capabilities of these observatories.

“Webb and Hubble show what we’ve always known to be true at NASA: We learn more when we work together,” said NASA Administrator Bill Nelson. “For the first time, Webb and Hubble have simultaneously captured imagery from the same target in the cosmos: an asteroid that was impacted by a spacecraft after a seven-million-mile journey. All of humanity eagerly awaits the discoveries to come from Webb, Hubble, and our ground-based telescopes – about the DART mission and beyond.”

Observations from Webb and Hubble together will allow scientists to gain knowledge about the nature of the surface of Dimorphos, how much material was ejected by the collision, and how fast it was ejected. Additionally, Webb and Hubble captured the impact in different wavelengths of light – Webb in infrared and Hubble in visible. Observing the impact across a wide array of wavelengths will reveal the distribution of particle sizes in the expanding dust cloud, helping to determine whether it threw off lots of big chunks or mostly fine dust. Combining this information, along with ground-based telescope observations, will help scientists to understand how effectively a kinetic impact can modify an asteroid’s orbit.

Webb Captures Impact Site Before and After Collision

Webb took one observation of the impact location before the collision took place, then several observations over the next few hours. Images from Webb’s Near-Infrared Camera (NIRCam) show a tight, compact core, with plumes of material appearing as wisps streaming away from the center of where the impact took place.

Observing the impact with Webb presented the flight operations, planning, and science teams with unique challenges, because of the asteroid’s speed of travel across the sky. As DART approached its target, the teams performed additional work in the weeks leading up to the impact to enable and test a method of tracking asteroids moving over three times faster than the original speed limit set for Webb.

“I have nothing but tremendous admiration for the Webb Mission Operations folks that made this a reality,” said principal investigator Cristina Thomas of Northern Arizona University in Flagstaff, Arizona. “We have been planning these observations for years, then in detail for weeks, and I’m tremendously happy this has come to fruition.”

Webb observed the impact over five hours total and captured 10 images. The data was collected as part of Webb’s Cycle 1 Guaranteed Time Observation Program 1245 led by Heidi Hammel of the Association of Universities for Research in Astronomy (AURA).

Hubble also captured observations of the binary system ahead of the impact, then again 15 minutes after DART hit the surface of Dimorphos. Images from Hubble’s Wide Field Camera 3 show the impact in visible light. Ejecta from the impact appear as rays stretching out from the body of the asteroid. The bolder, fanned-out spike of ejecta to the left of the asteroid is in the general direction from which DART approached.

Some of the rays appear to be curved slightly, but astronomers need to take a closer look to determine what this could mean. In the Hubble images, astronomers estimate that the brightness of the system increased by three times after impact, and saw that brightness hold steady, even eight hours after impact.

These images from NASA’s Hubble Space Telescope, taken (left to right) 22 minutes, 5 hours, and 8.2 hours after NASA’s Double Asteroid Redirection Test (DART) intentionally impacted Dimorphos, show expanding plumes of ejecta from the asteroid’s body. The Hubble images show ejecta from the impact that appear as rays stretching out from the body of the asteroid. The bolder, fanned-out spike of ejecta to the left of the asteroid is in the general direction from which DART approached. These observations, when combined with data from NASA’s James Webb Space Telescope, will allow scientists to gain knowledge about the nature of the surface of Dimorphos, how much material was ejected by the collision, how fast it was ejected, and the distribution of particle sizes in the expanding dust cloud.Credits: Science: NASA, ESA, Jian-Yang Li (PSI); image processing: Alyssa Pagan (STScI)

Hubble plans to monitor the Didymos-Dimorphos system 10 more times over the next three weeks. These regular, relatively long-term observations as the ejecta cloud expands and fades over time will paint a more complete picture of the cloud’s expansion from the ejection to its disappearance.

“When I saw the data, I was literally speechless, stunned by the amazing detail of the ejecta that Hubble captured,” said Jian-Yang Li of the Planetary Science Institute in Tucson, Arizona, who led the Hubble observations. “I feel lucky to witness this moment and be part of the team that made this happen.”

Hubble captured 45 images in the time immediately before and following DART’s impact with Dimorphos. The Hubble data was collected as part of Cycle 29 General Observers Program 16674.

The James Webb Space Telescope is the world’s premier space science observatory. Webb will solve mysteries in our solar system, look beyond to distant worlds around other stars, and probe the mysterious structures and origins of our universe and our place in it. Webb is an international program led by NASA with its partners, ESA (European Space Agency) and CSA (Canadian Space Agency).

The Hubble Space Telescope is a project of international cooperation between NASA and ESA. NASA’s Goddard Space Flight Center in Greenbelt, Maryland, manages the telescope. The Space Telescope Science Institute (STScI) in Baltimore, Maryland, conducts Hubble and Webb science operations. STScI is operated for NASA by the Association of Universities for Research in Astronomy, in Washington, D.C.