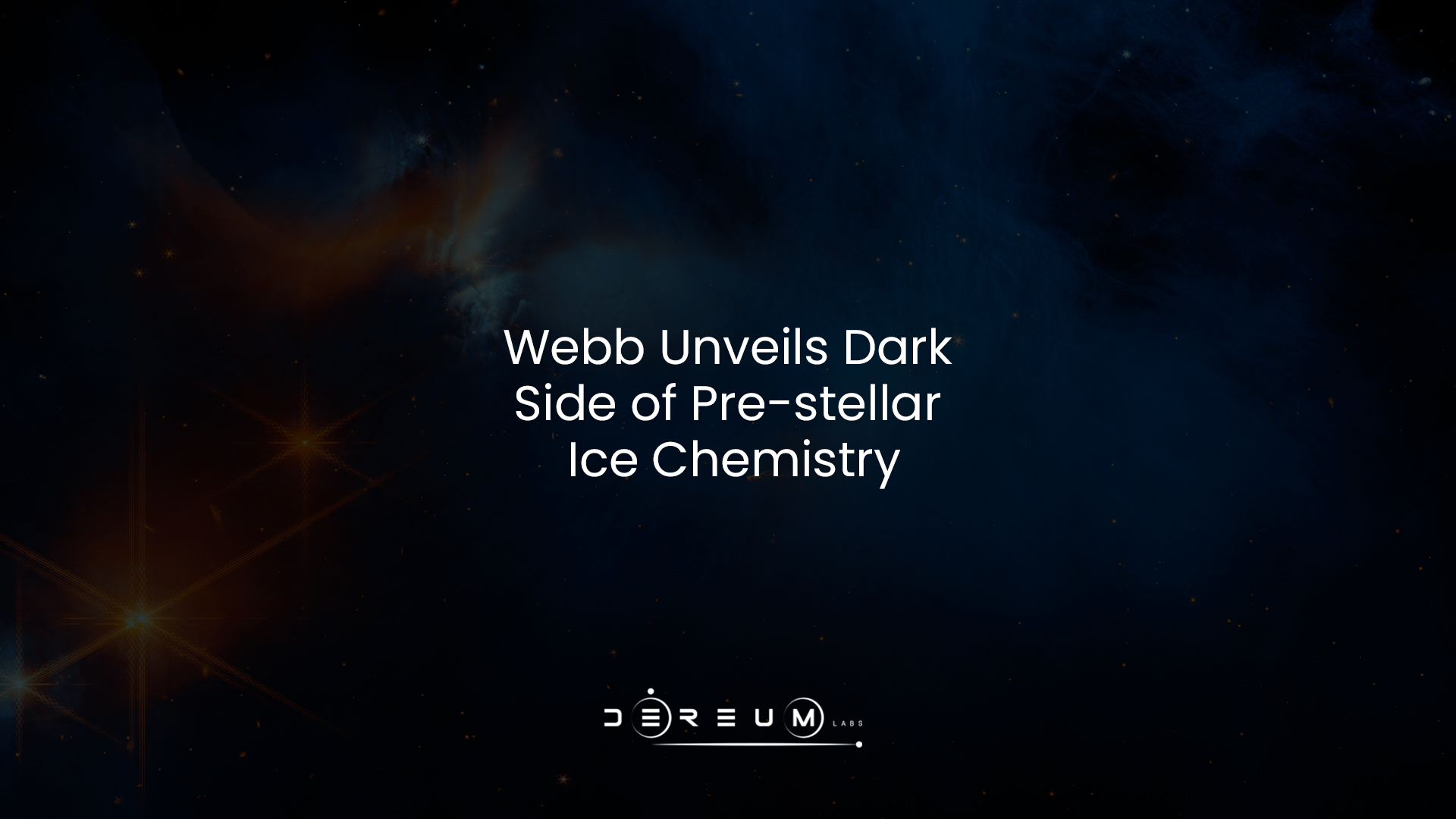 If you want to build a habitable planet, ices are a vital ingredient because they are the main source of several key elements — namely carbon, hydrogen, oxygen, nitrogen, and sulfur (referred to here as CHONS). These elements are important ingredients in both planetary atmospheres and molecules like sugars, alcohols, and simple amino acids.

An international team of astronomers using NASA’s James Webb Space Telescope has obtained an in-depth inventory of the deepest, coldest ices measured to date in a molecular cloud. In addition to simple ices like water, the team was able to identify frozen forms of a wide range of molecules, from carbonyl sulfide, ammonia, and methane, to the simplest complex organic molecule, methanol. (The researchers considered organic molecules to be complex when having six or more atoms.) This is the most comprehensive census to date of the icy ingredients available to make future generations of stars and planets, before they are heated during the formation of young stars.

“Our results provide insights into the initial, dark chemistry stage of the formation of ice on the interstellar dust grains that will grow into the centimeter-sized pebbles from which planets form in disks,” said Melissa McClure, an astronomer at Leiden Observatory in the Netherlands, who is the principal investigator of the observing program and lead author of the paper describing this result. “These observations open a new window on the formation pathways for the simple and complex molecules that are needed to make the building blocks of life.”

In addition to the identified molecules, the team found evidence for molecules more complex than methanol, and, although they didn’t definitively attribute these signals to specific molecules, this proves for the first time that complex molecules form in the icy depths of molecular clouds before stars are born.

“Our identification of complex organic molecules, like methanol and potentially ethanol, also suggests that the many star and planetary systems developing in this particular cloud will inherit molecules in a fairly advanced chemical state,” added Will Rocha, an astronomer at Leiden Observatory who contributed to this discovery. “This could mean that the presence of precursors to prebiotic molecules in planetary systems is a common result of star formation, rather than a unique feature of our own solar system.”

Astronomers have taken an inventory of the most deeply embedded ices in a cold molecular cloud to date. They used light from a background star, named NIR38, to illuminate the dark cloud called Chamaeleon I. Ices within the cloud absorbed certain wavelengths of infrared light, leaving spectral fingerprints called absorption lines. These lines indicate which substances are present within the molecular cloud. These graphs show spectral data from three of the James Webb Space Telescope’s instruments. In addition to simple ices like water, the science team was able to identify frozen forms of a wide range of molecules, from carbon dioxide, ammonia, and methane, to the simplest complex organic molecule, methanol.Credits: NASA, ESA, CSA, and J. Olmsted (STScI)

By detecting the sulfur-bearing ice carbonyl sulfide, the researchers were able to estimate the amount of sulfur embedded in icy pre-stellar dust grains for the first time. While the amount measured is larger than previously observed, it is still less than the total amount expected to be present in this cloud, based on its density. This is true for the other CHONS elements as well. A key challenge for astronomers is understanding where these elements are hiding: in ices, soot-like materials, or rocks. The amount of CHONS in each type of material determines how much of these elements end up in exoplanet atmospheres and how much in their interiors.

«The fact that we haven’t seen all of the CHONS that we expect may indicate that they are locked up in more rocky or sooty materials that we cannot measure,” explained McClure. “This could allow a greater diversity in the bulk composition of terrestrial planets.”

Chemical characterization of the ices was accomplished by studying how starlight from beyond the molecular cloud was absorbed by icy molecules within the cloud at specific infrared wavelengths visible to Webb. This process leaves behind chemical fingerprints known as absorption lines which can be compared with laboratory data to identify which ices (frozen molecules) are present in the molecular cloud. In this study, the team targeted ices buried in a particularly cold, dense, and difficult-to-investigate region of the Chamaeleon I molecular cloud, a region roughly 500 light-years from Earth which is currently in the process of forming dozens of young stars.

“We simply couldn’t have observed these ices without Webb,” elaborated Klaus Pontoppidan, Webb project scientist at the Space Telescope Science Institute in Baltimore, Maryland, who was involved in this research. “The ices show up as dips against a continuum of background starlight. In regions that are this cold and dense, much of the light from the background star is blocked, and Webb’s exquisite sensitivity was necessary to detect the starlight and therefore identify the ices in the molecular cloud.”

This research forms part of the Ice Age project, one of Webb’s 13 Early Release Science programs. These observations are designed to showcase Webb’s observing capabilities and to allow the astronomical community to learn how to get the best from its instruments. The Ice Age team has already planned further observations, and hopes to trace out the journey of ices from their formation through to the assemblage of icy comets.

“This is just the first in a series of spectral snapshots that we will obtain to see how the ices evolve from their initial synthesis to the comet-forming regions of protoplanetary disks,” concluded McClure. “This will tell us which mixture of ices — and therefore which elements — can eventually be delivered to the surfaces of terrestrial exoplanets or incorporated into the atmospheres of giant gas or ice planets.”

We recommend you: NASA’s Geotail Mission Operations Come to an End After 30 Years